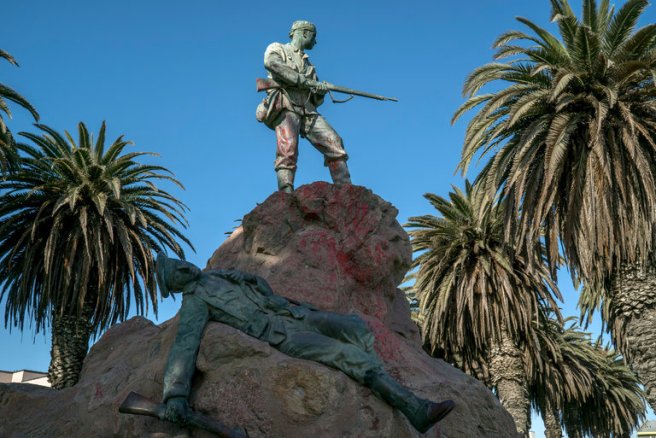 Over the weekend, the New York Times had a fascinating article about a statue in Namibia commemorating (yes, commemorating) Germany’s colonial genocide against the Herero and Nama over a century ago. Now, as some Namibians demand the statue’s removal, controversy has flared:

The push for the removal comes as the governments of Germany and Namibia are engaging in negotiations to close one of the grimmest chapters in Africa’s colonial history, the genocide of tens of thousands of Herero and Nama between 1904 and 1908. After decades of denial, German officials say they are ready to acknowledge the genocide formally, issue an apology and offer compensation.

German reticence is not the only reason the reckoning has taken so long. Namibia’s complicated internal dynamics have contributed as well. The Herero and Nama are minorities in a nation led since independence by the liberation party, the South West Africa People’s Organization, or Swapo, which is dominated by the Ovambo ethnic group. If Swapo has historically shown little interest in highlighting the colonial-era genocide, Namibia’s tiny but economically powerful German-speaking minority has shown strong resistance.

A desert city facing the Atlantic, Swakopmund is the center of Namibia’s German-speaking minority. It has what is perhaps the best collection of well-preserved colonial buildings in Africa, as well as a Bismarck Street and other thoroughfares named after German figures. Menus in hotels and restaurants are in German, catering to Namibia’s German minority as well as to German tourists.

The whole article is worth reading. Remembering the past—however we remember it—is a political act with contemporary significance. Historical narratives cannot be separated from the workings of power in the present. For some of Namibia’s German minority, an attack on the monument is an attack on their identity. If there is no place for the monument in modern Namibia, is there a place for them?

This brings to mind recent battles in the United States over Confederate monuments and the Confederate flag. One common argument in support of the monuments is that we must not “erase history.” This sounds reasonable on the surface but actually evades the real issue. Usually, the most ardent defenders of Confederate monuments are also the most committed to false historical narratives. Their myths and their identities have been shaped by these monuments. If they are taken down, more accurate historical narratives threaten to gain influence.

In Namibia, the German defenders of the monument are also the deniers of the genocide. They are trying to preserve an artifact of history precisely so that they might erase history. Provincial preservationism often works at cross-purposes with efforts to responsibly remember the past. Placing the monument in a museum would better serve both the narrow preservationist aim and the broader goal of historical accuracy.