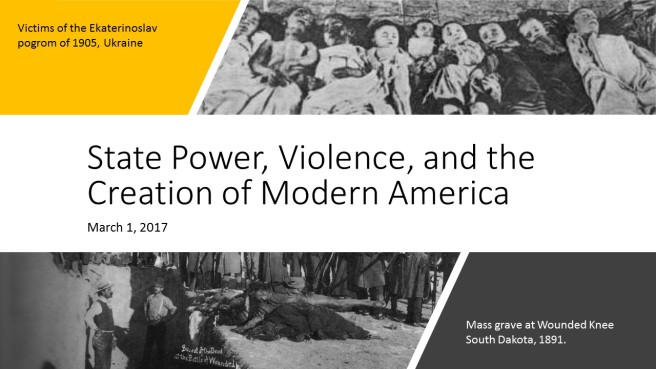 Because my class is about immigration, I thought the statue of liberty deserved its own lecture this week. It was a story that took us from French abolitionists and the conceiving of a monument to emancipation, to pogroms in the Pale of Settlement in the Russian Empire, to the hapless fundraising efforts of a committee in New York, to the life of Emma Lazarus and her obscure poem that would later become indelibly linked to the immigrant story and American identity.

It was also a chronologically expansive story that raised questions about memory and the shifting meanings we attach to symbols. When the statue of liberty was dedicated in 1886, none of the speakers mentioned immigrants. As everyone knew, that’s not what the statue was about. At the 50th anniversary ceremony in 1936, President Roosevelt spoke about nothing but immigration. As everyone knew, that’s what the statue was about. In many ways, it was the immigrants themselves who had made it so. As I tell my students, whatever the American Dream was, it was not only made in America.

Then on Wednesday we went from Fiddler on the Roof to the massacre at Wounded Knee. While the Russian Empire made life increasingly difficult for Jews—and while the statue of liberty was being dedicated—the American Empire was wrapping up its counterinsurgency campaigns in the West. In the U.S., it was only in this period in the decades after the Civil War that the state was actually able to exert effective control over all the territory it claimed. In the process, it increasingly claimed the right to tell minority populations where they could live, what they could do, and even the religious practices they could engage in. State violence against despised minorities was crucial to the turn of the century mass migration that formed modern America. While Russian violence made immigrants and refugees, American violence paved the way for their arrival and transformed immigrants into settlers.

I argued that this claim is not an abstraction or a metaphor, but a tangible reality on the ground. Take Pennington County, South Dakota, for example. It is home to Rapid City, and adjacent to the Pine Ridge Reservation where the Wounded Knee Massacre occurred. It is built entirely on land guaranteed to Native Americans by federal treaty. In 1890, less than two decades after its founding, 18% of its population was foreign born. They came from Canada and Germany, Ireland and Sweden, England and Norway. By 1910, there was a small contingent of Russian Jews too. Their opportunity was inseparable from the dispossession of others.

There are probably very few historians being trained now who would argue against the importance of telling transnational stories. But it’s easier said than done. When we tell transnational stories, it usually means there are a lot of balls to keep in the air. Sometimes they don’t all stay up. On Monday, I said meanwhile and suddenly we lurched from New York to Ukraine. These transitions were abrupt enough to be comical. After the lecture, a student emailed me to ask me what the point was. That makes it sound more disastrous than it probably was. The student was quite engaged and had incisive questions. But one of my main points had lacked clarity and she wanted more information. Good for her!

When we tell transnational stories, the contexts we need to be familiar with multiply quickly. This is one reason we might shy away from attempting it in the first place. I am not a historian of Russia; what errors might I introduce in my brief characterization of the 1881 pogroms? Will this broader story aid student understanding, or will my own imbalanced knowledge—heavy on U.S. national history—only confuse the story?

But the payoffs can be substantial, perhaps especially in the case of immigration history. Most immigration is by its nature a transnational act with connections to multiple countries. It doesn’t make historical sense to only focus on the destination country. This is one reason I’ve assigned Tara Zahra’s new book.

There are also broader benefits to be gained. I’ll note just one. There is no adequate way to deal with questions of American exceptionalism while teaching only an American national story. Transnational history helps us to engage more productively with notions of national identity and the meaning of America. If we’re only telling a national story and students hear about the millions of people who came here seeking opportunity, they may be inclined to think the United States is exceptionally good. But then when they hear about the discrimination and violence aimed at these immigrants, they may think the United States is exceptionally bad. But if we come to class thinking the U.S. is the best and leave thinking it’s the worst, we’re just as myopic and American-centric as when we started.

A broader framework upsets both assumptions, allowing students to see that millions of people were also immigrating to other places in search of opportunity, and that they faced hardship and discrimination both in their home countries and in their new destinations. It enables us to see a more nuanced and complicated story about how opportunity and oppression moved alongside each other, and about the millions of immigrants who came to America with the dream not of becoming Americans, but of returning to their homelands as soon as they could.