While doing lecture prep today it occurred to me that Roy Moore and Billy Sunday might have gotten along really well. Moore has cultivated an image as a fighter, as God’s man standing against the forces of liberalism and secularism. He believes America is a Christian nation. On Tuesday Moore defeated incumbent Alabama Senator Luther Strange in the Republican primary. The Senate is probably about to have its first contemporary full-fledged Christian nationalist. But Moore’s brand of reactionary politics and populist appeal under the banner of Christian nationalism is not at all new.

Billy Sunday, a popular fundamentalist preacher in the early twentieth century, leveraged his former career as a professional baseball player to garner crowds with the overt physicality of his preaching. His message, like Moore’s, was nationalistic and reactionary. As Frances Fitzgerald relates in her recent book, The Evangelicals, when the 100% Americanism craze swept across the country during the Great War Billy Sunday was happy to ride that wave. “Christianity and patriotism are synonymous terms,” he declared. During the Red Scare he supported the Palmer Raids and urged on the racist immigration restriction laws.

In his book, American Apocalypse, Mathew Avery Sutton describes Sunday concluding one of his revival meetings by leaping onto the pulpit and waving an American flag. On another occasion, Sunday declared, “No man can be true to his God without being true to his country.”

Sunday was a premillenialist who believed the world was going to hell in a handbasket. But that didn’t stop him from conflating faith and nation in the meantime. With a little poking around on Google I haven’t confirmed that Moore is a premillenialist, but I’d be a bit surprised if he isn’t.

Billy Sunday died in 1935 but he remained something of a legendary figure in some circles. His influence is suggested in this photo of a very young Billy Graham: 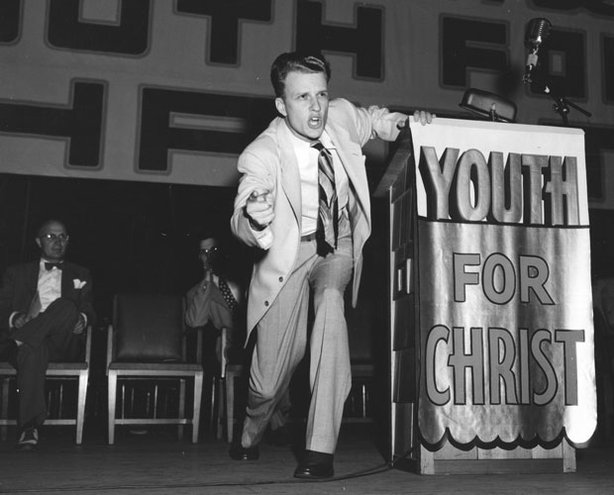