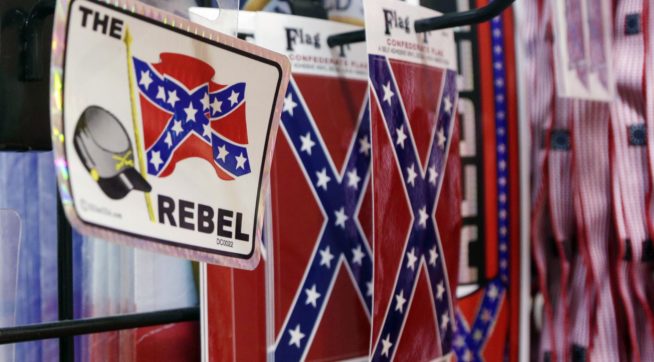 This weekend at a community celebration in white, small-town America, terrorist flags waved in the air. As children laughed and scampered about and people bought their glow sticks and funnel cakes, no one seemed to pay much attention to the symbols of evil the cart vendors pushed threw the crowd.

Of course I’m being deliberately provocative, but provocation can be a useful tool to awaken our deadened moral imaginations. Confederate flags at a community fair are evidence of cultural pathology. As far as I could discern, their presence stirred no resistance from the community.

I talked to one of the vendors pushing his little cart through the crowd. As best I can recall, the conversation went like this:

Me: “No, I’m not going to buy one. I know you’re just doing your job, but this flag is wildly offensive.”

Vendor: “No it ain’t; I just sold one to a black woman down the street.”

Me: “Oh, really?” (It seemed a transparent lie, not least because there were almost no black people there)

Vendor: “It’s history. If you don’t know your history it might offend you.”

At that he rushed on, seeking to avoid engaging, and I declined to harass him further. (For the record, I’m a historian.)

About 15 minutes later he came through our section of the crowd again and the Confederate flag was gone. I assume someone bought it. But maybe, just maybe, he took it down.

If people in your community were waving ISIS flags you would notice. We need to reframe our understanding of how despicable confederate nostalgia is. There must be no tolerance for it in your community. Confront people lovingly and politely, but don’t remain silent and become complicit in their sin. If you see something, say something.