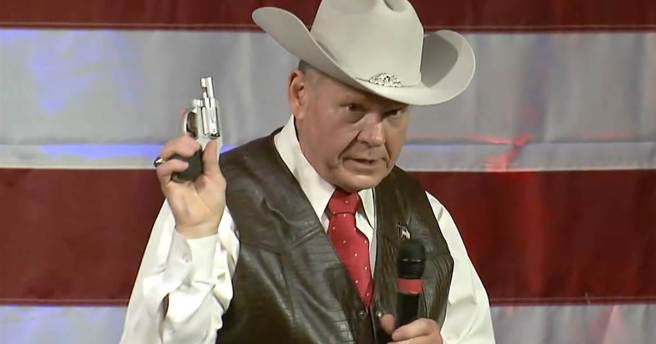 Last night some remarks Roy Moore made several months ago resurfaced. Back in September, the LA Times reported:

In response to a question from one of the only African Americans in the audience — who asked when Moore thought America was last “great” — Moore acknowledged the nation’s history of racial divisions, but said: “I think it was great at the time when families were united — even though we had slavery — they cared for one another…. Our families were strong, our country had a direction.”

I want to hear from the reporter about what might have been contained in the ellipsis, but it’s hard to imagine a context that makes this ok. There are two main ways to read this. One is that the united families he speaks of were white and he is ignoring the existence of black people. The other is that he is resurrecting the old saw that says while slavery wasn’t good, at least black families were together.

Either way you read it, the statement is hateful and dehumanizing. For the record, historians of slavery estimate that around a third of enslaved families in the antebellum period were broken up by sale. In any case, these families were not legally constituted and had no legal recourse in the face of every imaginable assault on the family: sale, assault, rape, child abuse, and so on.

Though Moore’s words reveal the mind of a racist extremist, they also reflect a sensibility that is quite common in the Christian Right. The movement’s politics are fueled by an extraordinary sense of loss and nostalgia.

Christian Right activists are forever trying to recover a lost golden age. They look to that nineteenth century moment when evangelicalism was at the center of American life. From public schools to universities, religion was honored. The nation’s foundation was secure. Then came the inroads of Darwinism, mass migration, urbanization and industrialization, then the sweeping cultural changes of the 1920s. Suddenly the country seemed so much more complicated.

The 1950s were an echo of that nineteenth century golden age. Never had the American public been so faithful in church attendance, and in the battle against communism America’s leaders publicly called for divine aid. Faith was once again honored in the public square. Hierarchies of sex, gender, and race were intact.

Then it all came crashing down in the 1960s. Sexual revolution, youth rebellion, Supreme Court decisions taking God out of schools. For the white nationalist evangelicals, the oppression of black people in these supposed golden ages is a feature. Others in the Christian Right are simply not thinking about black people at all. Because black people are not a part of their imagination, not a part of the community of full human beings, it is possible to read American history as a story of unmitigated decline.

What’s most striking about the Christian Right’s nostalgia is its extraordinarily narrow scope. The narrative of loss speaks to the historical experience and memory of a minority of Americans, but they insist that it defines the national story. For Roy Moore and his supporters, the idea that there are people in the world who aren’t white middle-class Christians, and they matter too, is a disorienting shock.