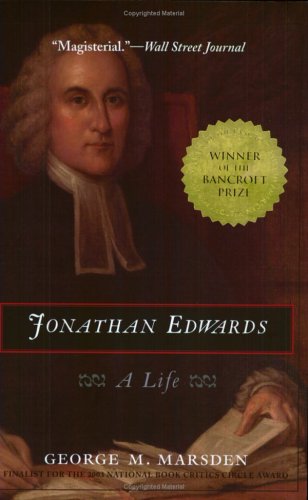 I’m reading George Marsden’s Bancroft Prize-winning biography of Jonathan Edwards, and it’s reminding me of being a kid. When done well, biographies can be incredibly immersive experiences, far more so than any movie or television series (in my humble opinion, of course). When I was young biographies were key entry points into history and they made my imagination run wild. It was, and still is, hard to believe that other people have existed and lived different lives from mine. (Think about it).

Entering into the life of a person in another time and place and following it through to its conclusion can be extremely sobering and inspiring. It also has the happy effect of assuring me that I’m thoroughly average, will always be average, and can bask in the freedom of not being A Great Man of History.

I think I would like to write a biography in the future. But I am puzzling over the ethical dilemmas of the genre. I remember when I finished my master’s thesis (which, though not strictly a biography, had some biographical features and focused in particular on John Stennis) the chair of the history department asked me, “Wait, do you like this guy?” Because Stennis was a white supremacist it was a loaded question! And I thought the answer ought to have been obvious, but perhaps it wasn’t. I had tried very hard to understand Stennis, and I firmly believe that there’s no such thing as a historian understanding their subjects too well. But…who we try hardest to understand is an important choice, one with consequences.

At the outset of Jonathan Edwards, Marsden asks us to try to understand Edwards in his time. He wasn’t an American or an evangelical, and he couldn’t imagine social hierarchy as anything but a good thing. So far so good. But I’m not sure Marsden’s commendable sensitivity to understanding Edwards extends very well to other actors in the book.

As much as I feel I understand Edwards, so much of the world around him seems largely invisible in this book (so far; I’m 300 pages in). Why are the Indians so opaque? Why are the enslaved so invisible? To say that they were so for Edwards for long stretches of his life tells us a little about Edwards but isn’t itself a reason to render them so in a new history.

These are old qualms that have been much discussed and argued over, but I’m still confused about them. And it seems to me that biography may be a genre particularly vulnerable to this problem. Nonetheless, I see why Marsden won the Bancroft Prize. It’s a great book.

Jonathan Edwards strikes me as the sort of person I want to encounter from the safe distance of the printed page and several hundreds years. From that distance he is quite fascinating. I don’t know that I would have wanted to hang out with him. He was incredibly intense about everything.

That reminds me: the other biography I’m just now getting into is Victor Sebestyen’s new life of Lenin. If only to prove that you can always make connections between things, I would say what makes Edwards and Lenin similar is their singular focus to see their principles through to their conclusion (I admit the results were considerably bloodier in Lenin’s case).

Back to Edwards: I didn’t know anything about him beyond the sorts of things you read in general surveys of the era. (Indeed, the dirty little secret of this whole enterprise I’m engaged in is that I don’t yet know much about the history of evangelicalism!). I’m fascinated by the way Edward’s views appear to scramble and upset so much of the evangelical tradition that in one way or another claims some descent from him.

He was a revivalist who believed deeply in hierarchical authority. He sought and achieved ecstatic spiritual experiences, and he was obsessed with reason. He brooded over the machinations of the Devil and the depravity of people, and he believed the millennium might be close at hand.

I’m especially interested in Edwards’ views of the relationship between church and state and of God’s plan for New England. Do we see in Edwards the “poisoned root” I referred to the other day? I need to know more.