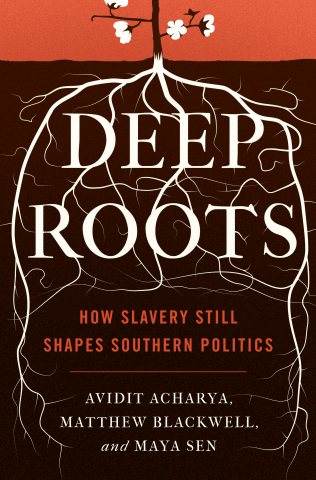 Nearly 70 years ago, in his classic study of southern politics, V.O. Key wrote, “Whatever phase of the southern political process one seeks to understand, sooner or later the trail of inquiry leads to the Negro.” Key’s explanation for the uniqueness of southern politics was the line of black-belt counties (so named for their soil) stretching through the Deep South and along the Mississippi River. These rich agricultural counties had high black populations because of their central role in the antebellum slave economy.

According to Key, the dominance of these counties in their respective states created a sectional bloc in national affairs, while factionalizing politics within the states themselves. Exerting an influence out of all proportion to their population, white elites in these counties built a uniquely southern brand of politics concerned with their very particular circumstances. As Key wrote, “In these areas a real problem of politics, broadly considered, is the maintenance of control by a white minority.”

Contemporary scholars have built on many of Key’s findings. These counties are definitely unique, and the white voters in them are among the most conservative and racially reactionary in the country. Why is this so?

A new book argues that what we are seeing in this region is the direct legacy of slavery on contemporary political attitudes. I plan to read the whole thing, but for now I am settling for the introduction, which the publisher has made available online. The authors write:

We argue in this book that political attitudes persist over time, making history a key mechanism in determining contemporary political attitudes…We argue that Southern slavery has had a lasting local effect on Southern political attitudes and therefore on regional and national politics. Whites who live in parts of the South that were heavily reliant on slavery and the inexpensive labor that the institution provided…are more conservative today, more cool toward African Americans, and less amenable to policies that many believe could promote black progress. By contrast, whites who live in places without an economic and political tradition rooted in the prevalence of slavery…are, by comparison, more progressive politically and on racial issues. These regional patterns have persisted historically, with attitudes being passed down over time and through generations.

The correlation the authors describe has been understood for a long time. It is a powerful clue, but it doesn’t establish cause.  How can they demonstrate that slavery and contemporary political attitudes really are linked in a causal way?

I’ll be curious to see how these authors, as political scientists, build a theoretical framework for making this argument. In brief, they contend that the link between slavery and contemporary attitudes has been transmitted by a mixture of institutions (Jim Crow laws for example) and “family socialization and community norms.” Knowing what we do about how sticky political affiliations can be across generations, it would be hard to believe that the political influence of a centuries-long society-defining institution like slavery could dry up in just a century and half. The trick is to try to measure and show that influence in a tangible way.

A lot of people don’t realize that there is an influential white southern political tradition based on opposition to the post-civil war constitution, democracy, and human rights. This is one of the most influential political traditions in American history. We don’t like to think or talk about it as much as the tradition of equality and freedom, but these visions have been running alongside each other throughout our history. It’s still active now. For voters influenced by that white southern political tradition, Trump’s racism and hostility to the rule of law likely make him more appealing, not less.