If white evangelicalism is ever to become a force for good in the world (you may disagree with the premise but I take it as axiomatic that it is not that now) it must confront its history and tell it anew. It must realize that the story of an evangelicalism that held fast to the faith while the modernists betrayed it is a self-serving myth.

In reality, the white evangelical mainstream in the 20th century was generally a heresy. Instead of carrying the undiluted good news faithfully through the choppy waters of modernity, it bowed down to the most insidious gods of the age—race, nationalism, materialism. White evangelicalism was often the opposite of good news. It was not, to put it in evangelical lingo, a saving faith. It was not news worth sharing.

As both a historian and an evangelical, I reject the idea that the bleak picture sketched above is the whole picture. There were moments of redemption, places of good news, people of noble faith. But when white evangelicals turn this happy story into the whole story they don’t just obscure the darker side, they actively reinforce the hubris of a religious community seeking to avoid repentance.

We won’t act righteously in the present without rebuilding our story from the ground up. The task at hand is not to hold true to the faith of our ancestors as much as to recognize and repent of the sins—their and ours—that have formed us.

At a recent meeting of evangelical leaders at Wheaton College, Dr. Mark Labberton, the President of Fuller Seminary, gave a speech showing what this can look like. The speech is remarkable for its honesty, moral clarity, and historical consciousness. There’s very little excuse-making here. Instead, in a spirit of humility, he reckons not only with what white evangelicalism has become, but with what it has long been:

This is not a recent crisis but a historic one.  We face a haunting specter with a shadow that reaches back further than the 2016 election—a history that helps define the depth of the sorrow, fear, anger, anxiety, and injustice around us. Today’s egregious collusion between evangelicals and worldly power is problematic enough: more painful and revealing is that such collusion has been our historic habit. Today’s collusion bears astonishing—and tragic—continuity with the past.

Right alongside the rich history of gospel faithfulness that evangelicalism has affirmed, there lies a destructive complicity with dominant cultural and racial power. Despite deep gospel confidence and rhetoric, evangelicalism has been long-wedded to a devastating social self-interest that defends the dominant culture over and against that of the gospel’s command to love the “other” as ourselves.  We are not naïve in our doctrine of sin that prefers self over all, but we have failed to recognize our own guilt in it.

Our professed trust in Jesus has not led evangelicals to die to ourselves, but often to justify our own self-assertion—even when that means complicity in the suffering and death of others. The scandal associated today with the evangelical gospel is not the scandal of the Cross of Christ, crucified for the salvation of the world.  Rather it is the scandal of our own arrogance, unconfessed before the Cross, revealing a hypocritical superiority that we dare to associate with the God who died to save the weak and the lost.

Labberton goes on to identify “the top four arenas in which this violation of spiritual and moral character has shown itself.” He names power, race, nationalism, and economics. Here he is on the question of race:

The Bible knows all people to be fully human, fearfully and wonderfully made in God’s image, knit together in our mother’s womb. All have sinned and fallen short of the glory of God, not just those who arrive as poor, hard-working immigrants fleeing violence or those wasting away in private prisons.  All are dead and in Christ made alive, and the evidence of the resurrection is that the peculiar body of God’s people, a new humanity of Jew and Greek, slave and free, male and female, are to be the evidence of a resurrected God. This is the glory of creation and new creation.

Those of us who are white evangelicals must acknowledge that our story is intertwined with, and often responsible for, much of the violence and oppression around racial injustice in our American story.  The stories of Native American, African American, Latino/a, or Asian peoples in the history of the United States cannot be told truthfully without naming the role of white evangelicals who testified to a God of redemption but whose theological, political, social, and economic choices contributed to suffering and injustice.  Stories of devastation are often absent from a happier white evangelical narrative of promised-land life, or buried in a sanitized story that claims that past injustice is not relevant for people of color today—despite the fact that nearly all people of color experience racism and its implications every day around the nation, including those in this room today.

This unreckoned-with reality of white evangelical racism permeates American life, and its tinderbox was lit on fire by the rhetoric of our national life in recent years—whether in reference to Ferguson, or Charlottesville, or “shithole countries” deemed without value. White history narrates the story of America’s heroes, and white evangelical history views those “good guys” as the providence of a good and faithful God.  When some white evangelicals triumphantly pronounce that we now have “the best president the religious right ever had,” the crisis it underscores to millions of people of color is not an indictment of our President as much as it is an indictment of white evangelicalism and a racist gospel. 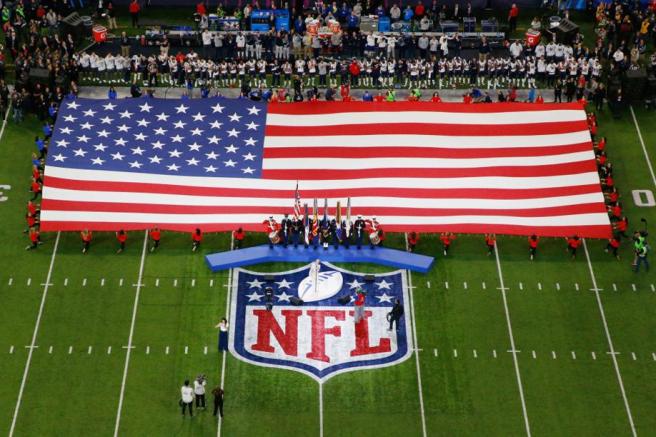 I watched the Super Bowl and I was thrilled to see the Eagles win. It was a great game. But it was also a spectacular assault on the moral senses. Perhaps I noticed it more now that I don’t usually watch games. At the Super Bowl the volume is raised to 10 and we are supposed to submit to our overlords of militarism, nationalism, and materialism. A healthy dash of sexism and historical appropriation is also recommended.

This is all so normalized that to talk about it is to immediately render oneself a hand-wringing do-gooder unable to have fun. Oh believe me, I had fun last night. But yeah, I noticed what I was being asked to bow down to.

There were the manipulative pregame displays of patriotism, in which we’re told to bask in militaristic nationalism. Nothing could be more quintessentially patriotic than saluting our troops, our carefully depoliticized troops, who are always only protecting us, defending freedom, always ready to respond to aggression but never to deliver it.

History is carefully excised from the patriotism on offer here. The aggressive and acquisitive militarism that has defined centuries of American expansion is not to be seen. There is only “America the Beautiful” embodied most fully in the humble soldier. After watching last night’s display, it’s no wonder so many people have the impression that the point of singing the national anthem is to honor soldiers in particular.

It is to be expected that nations would recognize and honor the important role that soldiers play in a fallen world. And whatever we think of the big questions of war and peace, it is unjust for us to be dismissive of the sacrifices soldiers make while we happily enjoy the fruits of their efforts.

The problem here is that patriotism has become militarized, so that the highest and fullest expression of American nationalism is the depoliticized and dehistoricized American soldier. This is an anti-republican ethos more suited to empire than a democratic state. But perhaps that’s fitting. Though our national self-image speaks of freedom and democracy, our celebrations tell a different story. We honor America not through self-government and civic-mindedness but by paying lip service to the sacrifices of soldiers.

And so protesting racism and police brutality on the NFL’s stage was unpatriotic. Somehow kneeling during the National Anthem had something to do with the troops. If you have a republican conception of citizenship and patriotism, this never would have occurred to you. But if deep down you believe in a militarized American empire, the logic works.

The debate over the player protests has not been about whether NFL games would become politicized. It has always been about whose politics would be displayed. And this is all quite cynical. In militarism there is money to be made. Concern for human life doesn’t sell. It offends too many Americans.

And then there were the commercials. Advertising in general is something not to be taken for granted. Basically, there was a time when it did not exist. Now it does. We are molded by it and we like it. I’m trying to raise kids and form some good things in them. But I constantly find myself asking, “how can I compete with that?” They are little materialists before they know what hit them. And I don’t know how to stop it.

There was the infamous ad this year, the MLK ad. Some folks thought it would be a good idea to use some words from one of Dr. King’s sermons to try to sell some trucks. Nevermind King’s increasingly radical anti-capitalist rhetoric. Nevermind that the sermon in question literally warned against buying cars and being duped by advertisers. Nevermind that the values King spoke of rebuke the foundations of our economy. That the King estate had to sign off on this garbage is yet another sad episode in a long and sordid tale of King’s descendants fighting for the crumbs from the table.

And how about that halftime show? It was a remarkably insipid performance, but you can’t really blame the NFL, right? It’s not as though there are a bunch of other talented performers around who could do a Super Bowl halftime show. So someone said, “Hey, what if we invite back the cause of the most notorious moment in halftime show history?” Sounds good! But what about Janet Jackson? “No, America has seen her boob. She must never perform again.”

If things weren’t so rigged against white men, Justin Timberlake would do the halftime show every year.

I had lots of fun watching the Super Bowl. I invited my sons to watch with me, and I just tried to close my eyes to all that it was demanding of us.